When the Montgomery County Health Department established the Luke Borinstein Public Health Award, the idea was to honor keep the memory of Borinstein ’19, who died in a tragic plane accident in 2016, alive in the community and in the department. 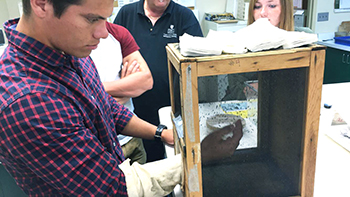 Artie Equihua ’20 never met Borinstein, but the more the staff at MCHD got to know Equihua, the more it became evident that the two Wabash men were very similar in their characteristics, their passion for public health, and the impact they had on the department in a small amount of time.

“Luke spent one semester with us and his dedication and commitment was immediately evident,” MCHD Director Amber Reed said. “We just feel like he made such an impression in such a short time here and really represented what we hope for our future doctors and public health graduates.

“Artie’s personality was reflective of Luke’s in a way we had not imagined, and he exemplified many of the same personal characteristics that impressed us so much with Luke. He was truly engaged in the work we were doing and gave his all to the projects no matter how fun or mundane.” 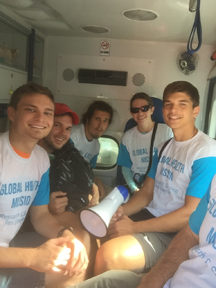 Equihua was one of three Wabash students who interned with the Montgomery County Health Department over the summer. The other two students did know Borinstein and both told Reed that Equihua resembled the essence of the award as it was intended.

“From the stories I have heard about Luke, I am not sure if I am quite the man he turned out to be,” Equihua said. “However, I am very proud and humbled to be compared in the same light to him. Moving forward, I have an obligation to live up to the expectation that Luke has set. He has created an example that will not be forgotten, and I look forward to striving to set that same example.”

Equihua might have had a large impact on the Montgomery County Health Department and its work, but he never would have guessed that going into the internship.

In fact, he said one of the main reasons for choosing to intern with MCHD was that he did not know a lot about public health.

“I really wanted to find an internship that would force me to adapt and teach me something new every day, and that was definitely the case working with them,” Equihua said.”

Equihua’s work focused on collecting and analyzing mosquitos for research and creating educational presentations on programs like Medicare and Medicaid. However, some of his most impactful experiences came from dealing directly with the community.

Home inspections are conducted regularly by the health department, and Equihua went on several throughout his internship. He visited the homes of people living in unsanitary conditions and learned how to communicate more effectively with people of different backgrounds and learning abilities.

There were times when he left homes with fleas on his clothes, but he left the internship with a more understanding perspective than he had started with.

“My core values have been altered to tolerate the actions of others first, rather than condemn,” he said. “The health department is here to keep us safe, and to educate us on how we can best take care of ourselves and our loved ones. As funny as it sounds, getting fleas was all it took for me to realize this and to understand the impact that I had on the family we were helping.”

The internship with the Montgomery County Health Department helped Equihua decide to attend medical school after graduation. It also helped him figure out exactly the kind of employee and coworker he wants to be, wherever he ends up.

“I have never seen such a close-knit work family,” Equihua said. “If I take anything with me from this internship, it is that I will strive to be as supportive to others as they were for me.”