Initiatives Team Up for Mental Health 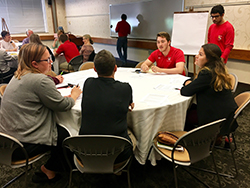 On their own, the Wabash Democracy and Public Discourse and Global Health initiatives have served communities from Crawfordsville to South America by working to find solutions to civic and public health issues.

The two initiatives came together for the first time on April 20 at the annual Indiana Public Health Association (IPHA) conference at Purdue University to facilitate and take part in conversations regarding mental health in Indiana.

“It is always frustrating to see the end result of an issue without being able to address the root cause,” Bilal Jawed ’17 of GHI said. “It was rewarding to be a part of this mental health deliberation because the discussion provided an opportunity to address the issue proactively at its root cause. Poor mental health is not a problem that can be solved overnight. It needs continuous and thoughtful discussion over time. It was an honor to be a part of the solution, even if it was in the most minor way.” 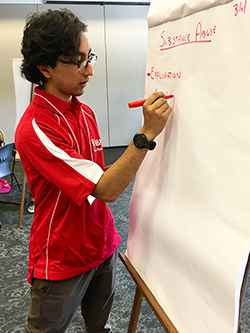 The pairing of these two Liberal Arts Plus initiatives was the idea of Professor of Biology and Director of the Wabash Global Health Initiative Eric Wetzel, who was asked to be on the planning committee for the conference.

When the IPHA expressed an interest in having group discussions instead of their regular question and answer panels, Wetzel automatically thought of the WDPD.

“In the course of all of the planning, I mentioned that Wabash has this other initiative and that’s what they do!” Wetzel explained. “It’s an interesting marriage because WDPD focuses on facilitating the conversation. They generate the report and reflect back to the community. My hope is that the Global Health students can be involved for the long haul, come alongside these public health organizations and help with implementation, internships, or public health education materials.

The event ended up being the largest the WDPD fellows have ever facilitated, with approximately 150 people taking part in three different discussions. The fellows facilitated conversations regarding youth suicide, diversity in public health, and mental health and youth.

“I think this experience helps students peel back another layer of that onion,” Wetzel said. “It opens their eyes to real issues because people are talking from their guts and from their hearts. Some things are coming out that are very personal.”

“As a lifelong Hoosier, I care a great deal about the issues Indiana faces,” WDPD fellow Jack Kellerman ’18 said. “Not only 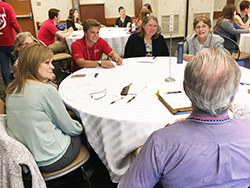 did I learn a lot about the present health issues facing Indiana through the research and deliberative event, I got to meet and have meaningful interactions with the community leaders throughout Indiana who live and breathe to make our state a better and healthier place to live.”

IPHA Executive Director Jerry King said the Wabash students helped the organization accomplish exactly what they wanted from the discussion, which will turn into more than simply thought-provoking conversations.

Wetzel explained that the report WDPD generates after the event will be used by the IPHA’s policy and advocacy committee to make a statement to the state legislature about the direction they believe the state should head in regards to mental health.

“Students are learning that this is really complex,” he said. “There are a lot of moving parts, and it’s complicated – there’s no single thing that you can do that will fix this. But they’re having a big impact on an important conversation about mental health in Indiana.”