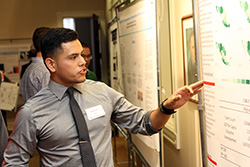 Solis is a double major in political science and Spanish with a specialization in American politics and international relations.

Now in its 31st year, the Ralph Bunche Summer Institute (RBSI) is an intensive five-week program held at Duke University. It is designed to introduce doctoral study in political science to those undergraduate students from under-represented racial and ethnic groups or those interested in broadening participation in political science and pursuing scholarship on issues affecting under-represented groups. Participants in the RBSI are drawn from a competitive national applicant pool.

During Solis’ sophomore year, he was elected president of the Unidos Por Sangre, the Wabash student organization which represents the Latino population on campus. His area of research interest is migration, both internal and external.

Solis recently participated in the National Science Foundation’s Research Experiences for Undergraduates program, where he assessed the relationship between drug-trafficking organizations and migration trends. He will present his results at the 75th annual Midwest Political Science Program this month.

Currently, Solis is coauthoring an encyclopedia entry for a forthcoming book called, Latinos in the US Political System: An Encyclopedia of Latinos as Voters, Candidates, and Office Holders. Solis plans to pursue a doctoral degree in political science with a focus on immigration and, ultimately, teach at the collegiate level.

Founded in 1903, the American Political Science Association (APSA) is the leading professional organization for the study of political science and serves more than 13,000 members in more than 80 countries.