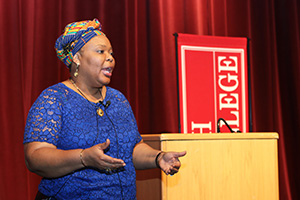 There are borders that define who we are and there are walls that separate us. It’s not policy; it’s invisible and personal. That’s what Nobel Peace Prize winner explained to the Wabash College community during her visit, saying that peace is not possible in any country while these exist.

“All of the young people today are anxious about making change,” Gbowee said. “I’m sure you Wabash men, whether you lean left or right, you’re thinking, What can I do to make my world – the world I care about – better?

“For you to be able to talk peace, live peace, and do peace,” she explained, “you must be able to cross that line – those invisible borders that we’ve created over time."

Gbowee won the Nobel Peace Prize in 2011 for her leading a women’s peace movement that brought an end to the 14-year-long Liberian Civil War.

The Women of Liberia Mass Action for Peace movement, which Gbowee organized, protested the war in a variety of ways. They held sit-ins and strikes. They wrote letters to ambassadors. And when peace talks finally occurred, Gbowee’s group sat outside of the building, practically holding the talks hostage, not moving until agreements were reached. 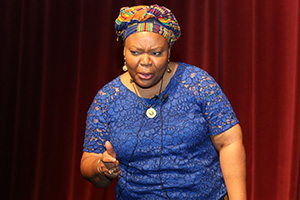 Even though the women achieved a strong sense of solidarity, it did not start out that way. They all came from different backgrounds, different neighborhoods, and different religions that had rarely worked together in the past.

“Does the bullet know the difference between the Christian and the Muslim?” Gbowee asked. “When a mother loses a child, is the pain she feels in her heart different because she’s Christian or because she’s Muslim? All of these questions brought us to a place where we had more in common than we had, and we needed to make conscious efforts to cross over and understand the other.”

Gbowee challenged the Wabash community to analyze themselves. No, they might not be in the midst of a deadly civil war, but are there divisions they’ve built that might separate them from the person sitting right beside them?

“Peace is not just a word that means the absence of violence,” Gbowee explained. “In peace is embedded brotherhood on the Wabash campus, sisterhood, common humanity, reconciliation, value for human life, indiscrimination.

Gbowee recognized peace is a process that is often easier said than done. It goes against what people do on a daily basis, making it oftentimes uncomfortable or even scary.

However, she explained, small acts of peace and kindness make big differences.

Pay attention to the things and the people around you, she said.

Ask someone to tell you their story. 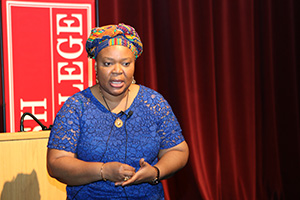 If you don’t feel you have the voice to speak out against wrongdoings, are you willing to support and be a friend to the victims?

Can you try to look past stereotypes and learn what you and another person may have in common?

“It is only by crossing over that we can tear down these nonsensical walls we’ve built that are making our world a difficult place to live,” Gbowee said. Cross over and get to see the common humanity in the other.

“When we make the effort to see people not by the object and the subject of our stereotypes, we must really see them. See the humanity in them and say, ‘I can see you for who you truly are – your humanness.’”