The Face of Commitment

The crowd of 250,000 people certainly made the day’s sweltering heat and humid air worse – but it was worth it. They had been bused in from all across the nation to march for what they believed in and the rights they deserved.

Amongst the crowd gathered on the Washington Mall stood one man who had traveled with his friends from New Jersey.

He looked up and listened to the words of Dr. Martin Luther King Jr. – a civil rights pioneer who was changing lives, inspiring people of all races throughout the country, and making sure that every person knew they were valuable.

Even in that moment, the man from Jersey knew that he was a part of history.

What he didn’t know was that those same qualities of Dr. Martin Luther King Jr. would one day be used to describe him. He would continue to be a part of history. And he, too, would be a pioneer for civil rights.

The man was Robert H. Johnson. 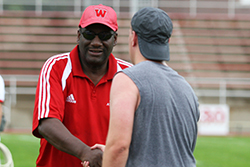 “It was obviously a very difficult time – not just for our campus but for the whole nation, not only regarding race relations but also cultural upheaval with the war in Vietnam,” Professor of English Emeritus Tobey Herzog said. “You put all of that together, and here’s Rob Johnson coming to Crawfordsville, Indiana.”

In 1971, after Wabash’s legendary track and field head coach Huntsman decided to retire from the position, Johnson’s name was thrown into the mix by Victor Ransom ’71, who had worked previously with Johnson at a camp in New Jersey.

Though faculty members say Wabash was actively trying to increase the number of African-Americans on campus during that time, they admit it was hard to attract potential minority faculty and staff members to an all-male campus in a small, rural Midwestern town.

One of Johnson’s former coaches told him to never say no to an opportunity, so Johnson took a chance and interviewed. But that did not mean that he was going to say yes. 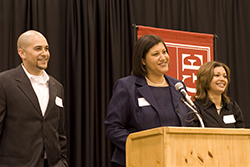 It wasn’t the color of his own skin that made Johnson nervous – it was his wife’s. Pat was a strawberry blonde from Idaho, whom Johnson had met while attending the University of Idaho on scholarship, and he was worried that Wabash College wasn’t ready for a bi-racial couple.

Johnson remembers thinking, “When they see us, there’s no way in hell they’re going to hire me.”

But they did. And Johnson accepted, becoming the first ever African-American head coach at Wabash College.

Around the same time, Wabash also hired Horace Turner to direct the Malcolm X Institute of Black Studies, a man whom Johnson had coached against in New Jersey. 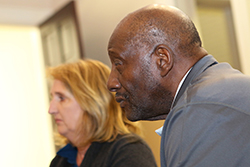 “Horace and I owe our Wabash experiences to the turbulent times and the social unrest of the civil rights movement,” Johnson said. “At that time, students of color on predominantly white campuses felt isolated and alone.”

So the two teamed up to make MXI a place of comfort and encouragement but also tough love. Education was important, and they were determined that all Wabash students see it through.

Johnson took that same method to the track, where his philosophy was student first, athlete second. If you strive to be a good person and a good student, success will follow.

“From the moment I walked onto the campus of Wabash College, Coach taught me the value of hard work,” said Geoff Lambert ’08, two-time NCAA All-American and thirteen-time NCAC champion. “He taught me how to set goals and to persevere through adversity. He looked out for me in the classroom and showed me how to be the best distance runner I could be. During my four years, Coach illustrated how one person can make a huge difference in the lives of young men.” 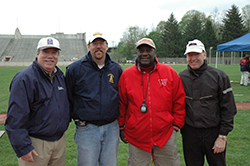 Johnson’s philosophy worked, not only for his team but for him as well. Though he faced a lot of pressure taking over for Huntsman, the program saw success in Johnson’s first year that only continued to increase.

Johnson himself was named Coach of the Year several times by multiple organizations – including Wabash. Beyond the College, Johnson served as an assistant for the US Junior National Team, which set two world records. He would later become the first Division III coach to serve as an assistant coach with the U.S. Olympic team at the 2000 Sydney Games.

On the national level, he’s certainly known for what he’s done. But at Wabash College, Rob Johnson – or as he’s often called: Johnson, Robert H. – is known, respected, and admired for the man he is. 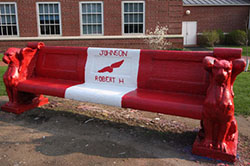 “The students obviously liked Rob,” Herzog said. “I think they liked him because he was an excellent coach, but more than that, he was an excellent person who took a lot of interest in them personally. The fact that they were athletes on his teams was secondary to the fact that they were Wabash students, and he felt an obligation to become involved in their lives. And it wasn’t just athletes. It wasn’t just students at MXI. It was all of our students.”

When Johnson and his family first arrived, he remembers the city of Crawfordsville was not always pleasant. There were dirty looks. There were times he and his children were called degrading names. However, they had expected a lot worse.

Today when Johnson goes into town, the only name he’s ever called is his own – but that happens anytime he goes anywhere.

“You can’t go anywhere without people knowing him,” current track and field coach Clyde Morgan laughed. “It’s turned into a game for the track team – seeing if we can take him in anywhere where nobody stops him.”

When he retired in 2 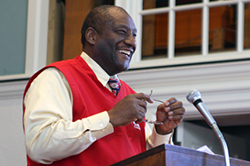 008 after 37 years of coaching, Johnson didn’t leave. Wabash College, Crawfordsville, and the people that make up both, they’re his home now. In fact, he jokes that he “bleeds little red W’s,” but that’s probably pretty accurate.

“I think he is Wabash College,” Morgan said. “He’s protective of it. He’s proud of it. He didn’t retire and get out of Dodge. He stayed on board, and he’s still doing more than just athletics. I think it’s in his bloodline to help, and, to me, that’s a Wabash man.”