While at Wabash I pretty much learned who I was, where I fit in the world, and how I wanted to live my life. I have called that life “a life of place,” since to me, where I lived has been much more important than what I did to make a living. —Tom Martella ’71 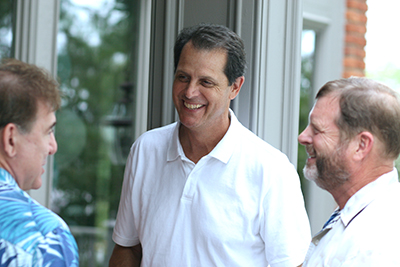 Last winter 20 alumni generously described to us their “return on investment” from their Wabash education, and their words inspired our Spring 2015 issue, WM: ROI.

But it took just one Wabash man to prompt the edition you’re reading now. Tom Martella’s intriguing claim that his alma mater taught him how to live “a life of place” gets at two things I have long wondered about our grads: Why are so many so deeply involved in their communities in such a variety of ways? What seed of that involvement is planted during their time here?

Martella credits professors John Fischer H’70 and David Hadley H’76 with “describing distant places with far different cultures, histories, and institutions from my own, and then encouraging me to think beyond a small town in the Midwest and who I was at the time.

“So learning how to do something wasn’t as important to me as learning how to live somewhere immersed in the lifeblood of a place,” Martella says. “It was all about relationships—seeking them, building them, and reaching beyond my easy or obvious set of friends.”

Even before his 20-year career as a consultant with Booz Allen Hamilton, Martella lived in Greece (thanks to classmate Yiannis Roubatis ’71 and a recommendation letter from Professor Fischer), Saudi Arabia, and Egypt “to experience firsthand the cultures and histories of regions that so appealed to me in the classroom.” Rising through the ranks at the international technology and management-consulting firm to retire as principal, Martella also lived in Kuwait and Brazil and now resides in Washington, DC.

“In each place I strove to be an active part of a community, getting to know people in their moment of history—their perspectives, their cultures, their immediate and long-term motivations,” Martella says. “The Wabash community created my understanding of the power of a true community, but it also created in me a desire to replicate such a community, such relationships, which would make my ‘life of place’ stimulating, supportive, and enjoyable.”

Martella’s “life of place” education only began at his alma mater.

“In my first job overseas a year out of Wabash, I made a brash comment to the business manager at the Greek school where I worked in Thessaloniki,” Martella recalls. “The manager told me, ‘You Americans are all alike. You come in here, don’t understand us, and make all these observations and suggestions. And then you leave. And we are here.’

“His rebuke made me reflect on what college had been for me—delving into subjects with little knowledge initially, but paying attention to the context and allowing true understanding to emerge. My comment to the business manager had totally missed that context. From that point on I was much more discreet, respecting the local knowledge resident in those who were there for the duration. By being there with them day by day, I learned to read the context to know when and how to participate in their lives and work.

“Just as critical for me was understanding that in business and in life, successful relationships are forged not by coming and going, but by remaining, learning, and participating in the community, and demonstrating that you are here to stay.”

IN THIS ISSUE you will find stories about or by alumni, students, and faculty living their own lives of place. You will glimpse some moments that instill that sense of community in Wabash students today. You will see how the College itself is better living a life of place in its partnership with Mayor Todd Barton ’00 and Crawfordsville, recently designated a Stellar Community, with grants and access to state funds that could reach $17 million.

It’s a way of grasping the importance of community summed up by Professor Bill Placher ’70 in his 1996 Homecoming Chapel Talk: “The way we best show our love to the whole world is to love with a particular passion some little part of it.”