In the decade since he graduated, Parker Sawyers ’05 modeled, renovated a house, managed a Broad Ripple restaurant, worked in state and local politics, and rubbed elbows with members of parliament in London. He did everything but act.

Shortly after leaving a lobbyist job in London, Sawyers was with his daughter in a park close to home when he happened upon another father-daughter combination. Small talk ensued, and when the conversation turned to jobs, Sawyers mentioned he’d like to be an actor.

As fate would have it, the newfound ally was an actor who helped Sawyers get hooked up with his agent. Within a month, Sawyers was on location in Oslo, Norway, shooting for “Lillyhammer,” the first exclusive content produced by Netflix.

“It’s still quite surreal,” said Sawyers. “I’ve only been acting four years. I had never done a school play or anything. I’ve been really lucky just bouncing.” 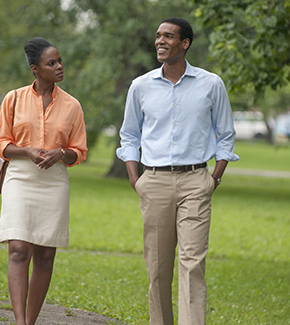 The feeling continues this month for Sawyers as he films his first leading role, playing Barack Obama in “Southside With You,” a story about the first date of the future President and First Lady. He has the good fortune of being the first actor to play Obama in a dramatic role.

The thought of playing the current leader of the free world presents its share of challenges. Because the film is set in 1989, Sawyers has the latitude to play the president almost like a fictional character.

“It’s a lot of studying because he’s a real person who the whole world knows,” Sawyers explained. “Luckily, the script focuses on their first date – there was no Instagram, no Twitter or YouTube – so I just go on instincts and put it together like a fictional character. Since we don’t have much on record of his private life, I’m guessing at how he probably would have been as a 28-year-old trying to woo a 25-year-old.”

Sawyers, who lives in London with his wife, Edita, and children, Sophia, 6, and Winston, 3, used Skype and a few meetings stateside with co-star Tika Sumpter to build the rapport essential in any film, but, perhaps, more so in this one because we know where the story goes 26 years later.

“I really love this script,” he started, “it’s just a movie about people. We know where they end up, which is so exciting. It’s such an interesting way to do a story about a public figure. If we pull it off and do it well, you might think, ‘Oh my gosh, this is how he was.’”

For those who know Sawyers well, there is more than a touch of irony in the fact that his first starring role happens to be a very important elected official. Politics is in his blood. He is the son of James and Paula Parker-Sawyers, who served as deputy mayor of Indianapolis under Bill Hudnut and has enjoyed a long career in public service and community activism in Indiana and Washington, D.C.

For Sawyers, politics always loomed as a potential career path. There were many doors opened to him, so he explored plenty of options.

“He did the soul searching we all do,” said McCoy, an associate in intellectual property at Faegre Baker Daniels. “Some of us are fortunate enough to figure it out while we are in college. Some do so after college. He kind of tried the more traditional route, so to speak, and just knew that was not what he was passionate about.”

Exploring options and finding passion might have been necessary, but the acting was never seemingly out of his view. During his senior year, Sawyers and James Ross ’05 responded to an assignment in physics class by producing a film – a comedy mockumentary – about an NCAA scavenger hunter searching for dark matter.

The duo, who have been friends since the sixth grade and still talk almost weekly, worked on the film for a month (“We spent a lot of time on it,” Ross says), shooting – it even included a dance scene – and editing what became a 45-minute film with the physics part, the dark matter, getting a brief mention in the first and last 20 seconds.

“It came together pretty well,” said Ross, an actor based in Southern California. “We thought about some film festivals, but we were perfectionists trying to do something better and never submitted it.”

Driven by a thirst for knowledge, the success Sawyers has enjoyed is no accident. Friends say he’s always learning from others. His mellow, at times practically silly, demeanor hides a humble and hungry approach to his craft. An approach that has rewarded him with work alongside directors like Kathryn Bigelow, Oliver Stone, and Kenneth Branagh.

“He’s been preparing himself for this for a long time,” McCoy said. “You’ll never know how gifted he is until you truly get to spend some time with him. His humility shines though, and for that reason, he’s easy to get along with.”

Ross agrees, adding that Sawyers’ myriad experiences allow him to more easily get into the shoes of a character.

“Parker has the look, which is big and takes you a long way,” he said,” but it’s his mind that sets him apart. He’s a brilliant guy. His creativity, his diverse skill set, and a wide range of experience really helps in acting. You are always playing different characters and you have to empathize with them, to be able understand what they are feeling.” 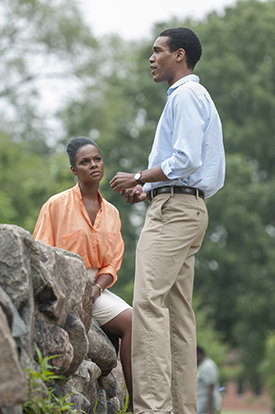 That range of experience includes his time at Wabash where he majored in philosophy. Sawyers remembers a test he took as a freshman where the professor wanted to know what he thought and not what he memorized. He injects a philosophical approach to the scripts he reads.

“I’ve got the words, now what do I think about it,” Sawyers said. “How can I insert this, that and the other? What’s my take on it? I’ve never formally studied beyond a Sunday acting class in London, but I’ve studied a lot of other stuff, so I can inject that into my acting.”

McCoy and Ross say that it was just a matter of time before Sawyers’ artistic talents came to the forefront. Aided by the support of some good friends, Sawyers only needed to find his way.

“Drew told me when we graduated that I should be an actor,” Sawyers said. “Acting just gets into you. I can do this. You carry that confidence. Hollywood likes confidence.

“Figuring it out was the toughest part for me,” he concluded. “I didn’t know what I wanted to do. Well, I did, but I didn’t know how to do it. Everybody else had a track – I’ll do this, then I‘ll go to law school, etc. – I only needed to ask, how do I start?”