The trio of Ben Finley ’15, David Gunderman ’15, and Patrick Rezek ’15 plan to serve assistantships in Argentina, Germany, and Poland, respectively.

The ETA program places a Fulbright winner in a classroom abroad to provide assistance to teachers of English to non-native English speakers, while serving in a small role as a U.S. cultural ambassador. The age and academic level of classroom students varies by country, ranging from kindergarten to university level.

“I am delighted for Ben, David, and Patrick,” said Susan Albrecht, the Graduate Fellowship Advisor at Wabash College. “They are wonderful young men and also quite different from one another. The Fulbright looks for good matches for their particular host nations, school settings, and programs, and these three young men offered talents, qualities, and the kind of enthusiasm which made them ideally suited to those placements.”

Finley, a native of Westfield, IN, was awarded the teaching grant and will be based in Argentina educating college-aged students seeking teaching licenses. His educational experience in Argentina will give him a greater fluency in the Spanish language and further his interest in literature and teaching. It’s an opportunity to pursue a passion for education in an immersive experience. 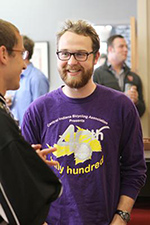 The Spanish major plans to involve himself in the religious community as well. His supplemental project will focus on how Pope Francis, the first Argentine pontiff, has affected the attitudes of practicing Catholics in the country toward Catholicism.

“Ben makes the guys around him better,” said Associate Professor of Religion Derek Nelson. “Great students ask?thoughtful questions and press their colleagues for answers, and Ben does that. He lifts up points that others make as important and worth exploring. And he takes their ideas more seriously, perhaps, than they themselves do.”

Finley has served as the rush chairman at Beta Theta Pi fraternity, and occupies leadership positions within the Wabash climbing, cycling, cooking, and pre-law clubs.

Gunderman, from Zionsville, IN, will be based in Germany educating high school-aged students. Teaching figures prominently in Gunderman’s plans, as he will enter graduate school following his Fulbright stint. Further, this opportunity is a chance to thank a few influential teachers.

“Teaching is going to be a huge part of my career, and I need practice teaching in every context. I love teaching and spending time with students,” Gunderman said. “My teachers have had a huge impact on me, especially my German teachers. That’s one of the reasons I want to give back to the German community.” 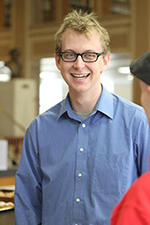 “Given his outstanding work in German, I am delighted that he has the opportunity to return to Germany on a Fulbright Fellowship. I am certain that David will make the most of this opportunity and benefit from it in countless ways. I cannot think of a better ambassador for Wabash and the liberal arts.”

Gunderman, a mathematics and German major with distinction in both, is familiar with subject matter that can be described as intimidating or difficult while serving as a math tutor. Such experiences have helped him to employ different teaching methods for individuals. Further, Gunderman hopes to start English language book and movie clubs, not only for his students, but for the local community as well. Anything that opens a dialogue and bridges a cultural gap will be helpful in the transition to a different culture.

He is a member of Kappa Sigma fraternity, the Glee Club, and held leadership positions within the Wabash German club. He is also a member of the Class of 2015 Senior Gift Campaign.

Rezek, a product of Indianapolis, IN, earned the teaching grant and will be based in Poland working with either high school or university students. He hopes the small classrooms and hands-on learning environments in the country will help him build relationships quickly. Additionally, Rezek intends to observe the Polish educational system, specifically looking at the unique and rigorous admissions process into public and private universities, as part of his supplemental research project.

“I’m very excited. Poland is a good fit for me,” said Rezek. “I like being in the classroom with the option for independent studies and extracurricular activities. Learning the culture will be a big plus through food, music, conversation, and with interactions outside of the classroom. Hopefully, being immersed will help me learn the language and culture quickly.”

“Patrick is always among the top achievers – always responsible and fully engaged, passionate and committed to understanding and finding relevance in course texts and field experiences,” said Michele Pittard, Associate Professor of Educational Studies. “I have enjoyed watching Patrick grow in to a well-respected leader on campus, and I am confident he will take full advantage of the opportunities afforded to him through the Fulbright award.” 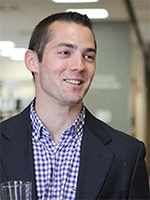 An English major with a minor in education, Rezek has hopes of going to law school with a future goal of collegiate administration. He hopes his previous experience in the classroom both as a student teacher and in immersion settings, as well as seven years as a summer camp counselor, will prove beneficial in a country where he has no language proficiency.

Rezek is a member of Sigma Chi fraternity, and is involved with the Wabash rugby club, and the Class of 2015 Senior Gift Campaign.

In 1945, Senator J. William Fulbright introduced a bill in the United States Congress that called for the use of surplus war property to fund the 'promotion of international good will through the exchange of students in the fields of education, culture, and science.'

From its inception, the Fulbright Program has fostered relationships in which citizens and governments of other countries work with the U.S. to set joint priorities and shape the program to meet shared needs. The fundamental principle of international partnership remains at the core of the Fulbright mission.

Over the last two years, Wabash has produced six Fulbright recipients and a Rhodes Scholar, another good indicator of the high caliber of the student body.

“I would like to think that having six Fulbright recipients and a Rhodes Scholar in the past two years would signal to other Wabash students that our brightest and best scholars are true scholars – talented individuals with tremendous gifts to offer – who compete with anyone,” said Albrecht. “My hope is that more of our young men will realize this and put forth their own candidacy for a Fulbright or other major fellowship.”