I am often asked questions like, “What was the first…” or “Who was the first…” I am sorry to say that too often the answer is that I really don’t know. True firsts are pretty tough to nail down. This posting is about one of those true firsts, the first QB for a Wabash football team – William K. “Billy” Martin [W1887]. A local boy, Billy entered Wabash in 1881 as a prep student. He studied for two years learning his Latin and Greek and in the fall of 1883 entered as a freshman with the class of 1887. A Sigma Chi, Billy loved sports and played the only organized sport at Wabash at that time, baseball, and was the captain of the team. 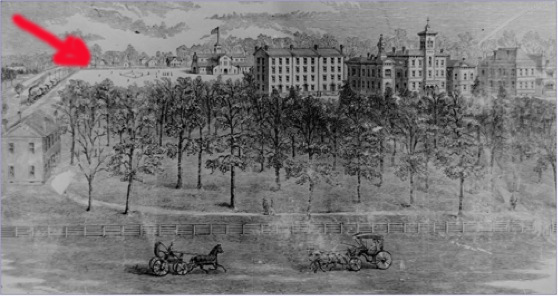 This lithograph shows us Wabash of that era and in the top left of the image, we can just see the baseball diamond. Baseball was very popular, but there was a new sport gaining popularity – foot ball.

Last month I shared a good bit about the 1886 season, the year that modern style American football arrived in Indiana. You may remember that the Indianapolis Athletic Club created a league with Wabash, Hanover, Indiana University, Butler and Franklin as the first schools. All games were played in Indianapolis. The Athletic Club covered the expenses and collected the gate receipts. One loss and your team was out of the hunt, the last undefeated team won the state championship. Our quarterback in that season was Billy Martin. Below is the record of their season.

It was after the tie with Franklin that the team felt they needed a cheer AND a color. A meeting was held and the  famous line, “Heliotrope Hell! We want blood!” Who said it? It was Billy Martin, quarterback of the team, leading the way, on and off the field.

As we can see from the scrapbook record at left, We beat Franklin and Hanover, who defeated Butler who defeated Indiana. According the Indianapolis Athletic Club rules, we were the Indiana State Champions! 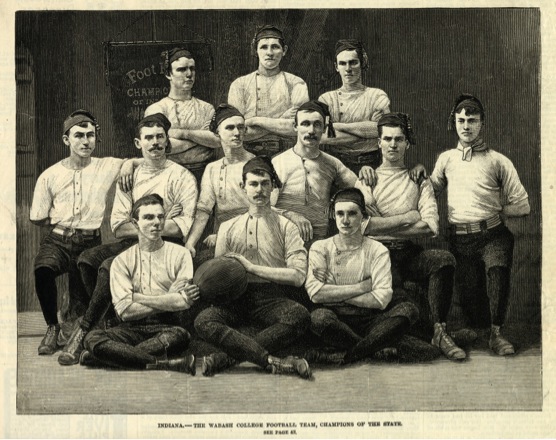 In later life Billy Martin was a successful business man here in town. His obituary in the Wabash Bulletin of 1949 described as a “pioneer in the Indiana ice industry.” But to those who love Wabash, Billy Martin’s legacy lives on in each of our athletic uniforms, in the Wabash scarlet we wear to show our support, and in that spirit that would later be summed up with the slogan “Wabash Always Fights!”