Cory Kopitzke ’14 smiled with pride when he thought of the names of past Moot Court Top Advocates. Kopitzke added his name to previous winners Tuesday night during the 20th Wabash Moot Court competition. 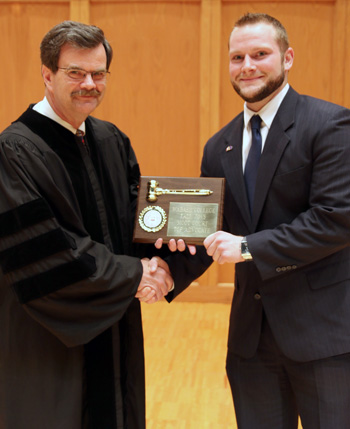 "It’s just great because the people who’ve won it have gone on to do great things,” the senior said. "Riley Floyd ’13 won last year and is at IU Maurer this year, a great law school. He’s a guy I really looked up to. Other individuals like Donovan Bisbee have won this and I see him doing great things in his future. It puts a good feeling in you to see guys like that winning it and now I’m on the same platform.”

The Wabash College Rhetoric Department and Wabash alumni lawyers have been presenting the program for 20 years. The competition started this year with 36 students arguing a case about the constitutionality of an amendment to the constitution to prohibit any form of affirmative action in university admissions. The Wabash alums judge the early rounds paring the numbers to 12 then four. 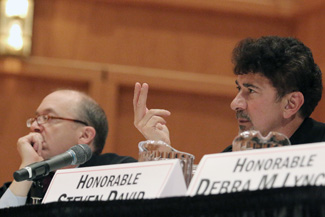 “Your conduct tonight makes me very, very proud,” said Wilson ’77. “You were fine examples of what my college teaches and that’s to think critically, lead effectively, and embody our mission statement.”

What makes the Wabash Moot Court competition unique is that it’s extremely rare at the undergraduate level. Several of the judges made comments about the impressive nature of the program.

"I’ve judged moot court many times before but never at the undergraduate level,” Lynch said. “You all were extremely well prepared.”

Judge David told the four finalists he looks forward to being present when they are sworn in to the Indiana Bar Association. “Even at the Supreme Court level, we’ve had lawyers who were not prepared as well as you gentlemen,” the Supreme Court justice said. “All of you had a passion for your position and what is just as important is that none of you became so emotional that it diluted your argument.

“I could not have done what you did when I was in college."

President Hess expressed his pride in the four Wabash students and got the biggest chuckle when talking about the difficulty of the task. “My colleagues have said they couldn’t do what you did here tonight when they were in college. I don’t think I could have done what you did even as president of this college. You demonstrated the guts and know how that embodies a Wabash man.” 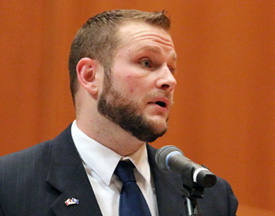 Kopitzke plans to pursue a career in law, hopefully at IU Law School. He competed last year but was eliminated in the semi-final round. The previous experience helped Tuesday night.

“I was a little bit more comfortable than I thought I was going to be,” he said. “In the preliminary round the justices kind of show their cards, if you will, and give you a facial expression that tells you how you’re doing. But here they were very stone-faced. It was a bit unnerving that I couldn’t tell how they were feeling. But it was certainly fun.”

A large contingent of students from Indianapolis’ Lawrence North High School was on hand to watch the competition, as in past years. The LN students will have a Moot Court Competition of their own using the same case later in the school year.

Rhetoric Professor Todd McDorman anchors the competition for Wabash. Scott Himsel ’85, who teaches at Wabash and is an Indianapolis attorney, joins with Matt Griffith ’89 to coordinate the alumni legal participation. The Wabash alums judge the competition, assist the students in preparation, and make final contributions to the program.