Dan Rogers: Dr. Coss Said, 'Get Out of Town'

Students attending Thursday Chapel learned about one of the College’s most influential graduates from Modern Language Professor Dan Rogers. The Spanish professor used the writings and words of Dr. John Coss to talk about “getting out of town.”

You can see the entire Chapel Talk on YouTube. 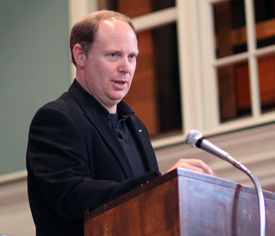 Coss, a 1906 graduate, was an outspoken Trustee in the 1920s who wasn’t afraid to write the President George McIntosh with his specific ideas and suggestions. “He wanted to provide a rich and sophisticated education for our students,” Rogers said.
Rogers noted it was Coss who suggested the College should hire full time professors to teach French and Spanish. He wasn’t hesitant to suggest what buildings should be built, offer his thoughts on student conduct, and even suggested that a few of the College’s professors should be fired.
But Rogers’ primary point was Coss’ strong desire the professors “get out of town” and expand their knowledge of the world. After Coss graduated in 1906 he left for New York City. He earned advance degrees and then taught at Columbia.
The Coss Fund for Faculty Development was created in 1950 to “engage in research, writing or study, or other activities deemed to be conducive to the benefit of the College.” He particularly urged faculty to study abroad in Europe, Rogers said.
“I know what a semester in Europe or Ecuador can do for a student,” Rogers attested. Rogers helped design and now leads the College’s summer Ecuador program. He talked about students’ reactions when arriving in Ecuador and the experiences they have abroad.
He urged students to take advantage of the opportunities Wabash offers to go abroad and not to shy away from being “wide-eyed” about the experience.