Deciding to Go All In 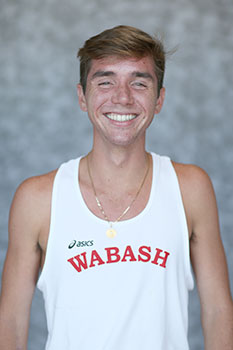 For each race Dominic Patacsil ’19 runs, he faces competition from more than the runners surrounding him. They’re just the external competition. Then there’s the voice inside his head saying it hurts and he just can’t go any farther.

With several great finishes already under his belt this season and a good chance of making another appearance at nationals, Patacsil has figured out how to beat them both.

The West Lafayette native didn’t think he’d ever end up where he is now, though – both as a runner and as a Wabash student.

When Patacsil was applying to colleges, he applied mostly to small, private schools on the West Coast, knowing he wanted to go somewhere that gave him the chance to be known and to really know other people. But he didn’t want to go to Wabash.

“My brother Sam went here, and I told myself I wanted to be different than my brother,” Patacsil said. “I wanted to do my own thing; I wanted to get away.”

He admits he and his brother are competitive and that he was definitely the annoying little brother growing up. If they weren’t competing against each other, they were competing in their individual sports.

For Patacsil, that was wrestling. He started hitting the mat in first grade, but, in middle school, a freak accident with his right arm sent him to Riley Children’s Hospital, where he left with two plates, eleven screws, and what was basically a complete reconstruction of his right forearm.

When he realized he wouldn’t be able to wrestle again, in a little brother way, he says, he looked to Sam.

“About that time, Sam had picked up running,” he said. “He was here and doing some good things, and I very much looked up to him. But underneath the surface, I wanted to do what he was doing and try to do it better.”

He didn’t start out as a great runner, but he put in a lot of time and training that made him better. It also made him fall in love with the sport.

Patacsil’s high school success led to invitations to run for different colleges, including from his brother’s coach at Wabash. He had to fight through his admitted stubbornness but eventually saw a program with a legacy he wanted to contribute to less than an hour from home … at his brother’s alma mater. 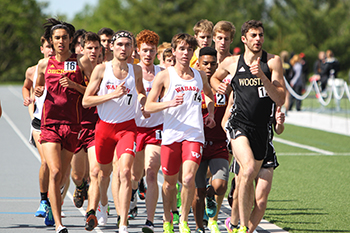 “As a freshman with nothing committed to Wabash, a lot of my decision was riding on the coach who recruited me, and he ended up leaving about a month before my freshman year started. So then I was kind of thrown into a period of uncertainty. All of us were.”

Though the team pulled together and finished eighth at Nationals that year, Patacsil said he had already been nitpicking his Wabash experience and focusing on flaws so much his first semester that he accepted a transfer enrollment to the University of Portland.

“I went home for Thanksgiving, and I remember it was the Sunday before coming back, my mom and I went out to breakfast,” he said. “She was super supportive of whatever decision I made, but she saw that decision as a self-fulfilling prophecy. Like I thought I deserved something more. She said I just needed to stop being egotistical and start caring for others. Those are strong words to hear!”

Patacsil had a decision to make. Like in each of his races, should he listen to the voice in his head saying it’d be easier to give up? Or should he push through and give it all he has?

“It was so easy to find flaws in a niche school like Wabash,” he said, “but I decided to be open. That’s a really broad term, but it’s true. It’s mostly a mindset. I was going to be open to it and give Wabash a fair shot. I’ve had great success here ever since.”

Patacsil is now a double major in English and Spanish and lives with several members of the “Redpack” cross country team. Their workouts consist of running 85-90 miles a week, which has led to a lot of fun and a lot of success.

It’s not his athletic success that make Patacsil so grateful he stayed at Wabash. It’s the relationships he’s made.

“I realized so many people are on my side here,” he said. “I don’t really know why sometimes. There are people on your side simply for the fact that they want to see you be better or succeed. When you come here, you fall under the wings of someone. Maybe I found those people later than some, but I found them.” 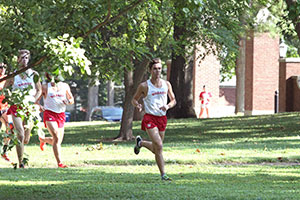 He might not have expected it three years ago after losing the coach who recruited him, but the relationship he’s built with his current cross country coach Colin Young that has become one of his favorites.

“He’s just invested in me as a person,” Patacsil said. “He’s been extremely influential in my growth, and I believe in all the training that he sets for me. He has expectations for all of us but nothing we can’t achieve. He sees our potential and is simply cultivating us to be better runners and better men.”

Patacsil is contemplating pursuing a master’s in Creative Writing or applying for a Fulbright Scholarship. He may eventually become a professor, and he wants to use his Spanish-speaking abilities in some capacity.

But for right now, like he does in each of his races, he’s just focusing on finishing strong here at Wabash and, hopefully, qualifying for nationals again.